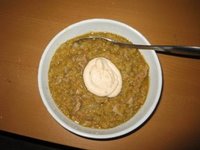 I wasn’t feeling too well yesterday so I wasn’t really in the mood to go to the grocery store and since our Microwave oven was broken (now fixed, since apparently the plug had slipped out of the socket) I couldn’t re-heat any of the 10 lunchboxes that my mom gave me this weekend. So I was “forced” to make do with the food that I had at home, and since that wasn’t much and I wasn’t in the food making mood, I had to settle for something easy and quick. I was reading some blogs when I found Frida’s blog where she talked about a lentil soup she had made. So I decided to try making one myself, even though I wasn’t absolutely sure that I actually liked lentils. So I fried an onion in some olive oil and added some bacon slices. Fried them until the onion became transparent. Then I added 1 dl lentils and about 1 liter water. I also used lots of spices, I’m not quite sure which ones, but just add whatever you want. Then I let the soup boil about 20 minutes and the soup should thicken, it should be like pea soup. If you taste it, the lentils should be soft. I served my soup with some creamy hamburger dressing since I had no yogurt or creme fraiche. It was scrumptious! Give it a try you will definitely be surprised.

Charmila be kefta o ibayd – Charmila with meatballs and eggs