After a nice breakfast outside in the sunshine with Birthday presents for my Mother-in-law, we made ourselves ready to get going towards town to make sure that we use the little time we have left in Canada. Andy drove his Dad in to work and then he came and picked us up and we went over to the south side and towards the large electronic chain Best Buy. We wanted to buy a couple of new memory (SD) cards for our new camera, and Best Buy just happened to have a really good offer on hand. A ten minutes shopping and then on back north and towards Montreal city center.

We parked the car in Andy’s Dad’s building and started walking up Rue University towards St Catherine. First we had to pick off a cache that had been taunting us since our last visit, and since it was so close to the office, it seemed like one that we couldn’t really leave… So we spent some time trying to be discrete and log the cache without too many people seeing what we were doing…

And as always I make sure that I take lots of photographs during our outings and Montreal in the Summer is a beautiful city to photograph especially with my new camera.

We decided to take the “short cut” or the “AC-route” through the Gare Centrale (Central Train Station) since the weather was getting hotter by the minute. The sun was shining in full force and there was very little wind. Once we  had gotten towards the center of the Gare, we realized that it might as well be time fore lunch, since we were going to have a big meal at Baton Rouge later on in the evening. So we rang Andy’s Dad and asked him if he wanted a lunch date and he agreed so in a few minutes we met him at the Thai Express in the Gare and had lunch. Thai Express is a favorite of ours since last time we were here, they have great spicy Thai food. But the portions are huge – so don’t expect to eat it all…

After food we set of towards some shopping and Andy’s Mom and I found ourselves a couple of purses, which is nice since I’ve managed to break one purse on this trip already. So now I’ve been able to replace it with a Lula off the shoulder bag. Then Andy’s dad left us and we continued towards Rue St. Catherine and then towards the Indigo bookstore. I picked up a book that I saw the last time we were there and my Mother-in-law did some shopping.

Our next stop was the Inuit-tourist-shop at the other end of Rue St. Catherine. We visited the store several times last time we were here and also we had made a stop here yesterday to do some checking on what they had. Last time we were in Canada, we didn’t really do much shopping, it didn’t really seem like we could find anything that we wanted. We did buy a couple of books about Canada and also some other small souvenirs but nothing big. So this time we decided that we wanted to buy a Inuksuk, a stone landmark used by the Inuit. Which is something that I regretted that we didn’t get the last time we were here.

Our next stop was China Town. A place in Montreal that we had never been to. And China Town is usually really a lot of fun. Our mission was to find a particular shop that sold tea pots but also to just walk around. Since it was getting hotter and hotter, we were in dire need of a café or a shop that sold drinks. But it wasn’t easy to find…

After finding the tea pot store and buying 4 cast iron tea pots (poor Andy’s arms) we found a little convinence store that sold cold drinks. We bought some and sat down along a wall with this as a view, right next to Parc Sun-Yat-Sen.

The temperatures were around 30 C and we really didn’t have much wind so we decided to make our way back to the car and set of home for a quick relax before we went back to town again for dinner.

On our way home we picked of another cache that had been taunting us since last year, but this one was on Nun’s island, right next to the beautiful garden.

We got home and unloaded the car and changed clothes and sat outside in the shade and had some ice cream, just enjoying each others company and the lovely weather. Andy’s Dad called and said that he was just about done at the office, and that was our que to get on going towards town again.

We got to the office and parked the car and then all four of us made our way towards La Baie, a large high-end department store to have a look. They have a lot of beautiful items as well as a really good spread of kitchen products.

Then we made our way down towards Place d’Arts and the great restaurant Baton Rouge. Where they serve the best Ribs in the whole of Canada. And the best Ribs I’ve ever had. But since I was stupid last time I didn’t even try them I had to make it up this time and there wasn’t even a possibility that I was going to have anything else on the menu.

When we got there at around 6.30 p.m. the place was packed. There wasn’t any free tables but we were told that our wait was going to be around 20 minutes. So we decided to have a cool drink to chill us a bit from the weather and the walk. We ordered Strawberry daquiri’s.

Then we ordered Cheddar Cheese Dip for an appetizer to share. It was delicious! Melted cheese with jalapenos and chopped tomatoes. YUM!

We all ordered Ribs, as I said there really isn’t another option, Baton Rouge are famous for their beautiful Ribs. And OH MY! They are to die for… I had mine served with a baked potatoe fully dressed.

After a beautiful dinner, both celebrating my Mother-in-laws birthday and that we really wanted to go back to Baton Rouge we walked back through town towards the office. Montreal really is a beautiful city during the summer. They use their planting spots wizely, with colorful flowers and beautiful trees and even strawberries and raspberries planted along the roads next to buss stops. Free for all to have… It’s such a great city! 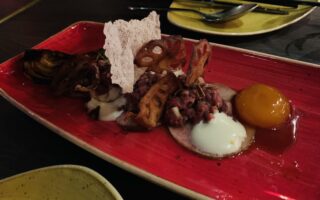